A testimonial from Alexander Khlevnuk, Chief Revenue Officer at iDeals Solutions about working with Roman.ua. 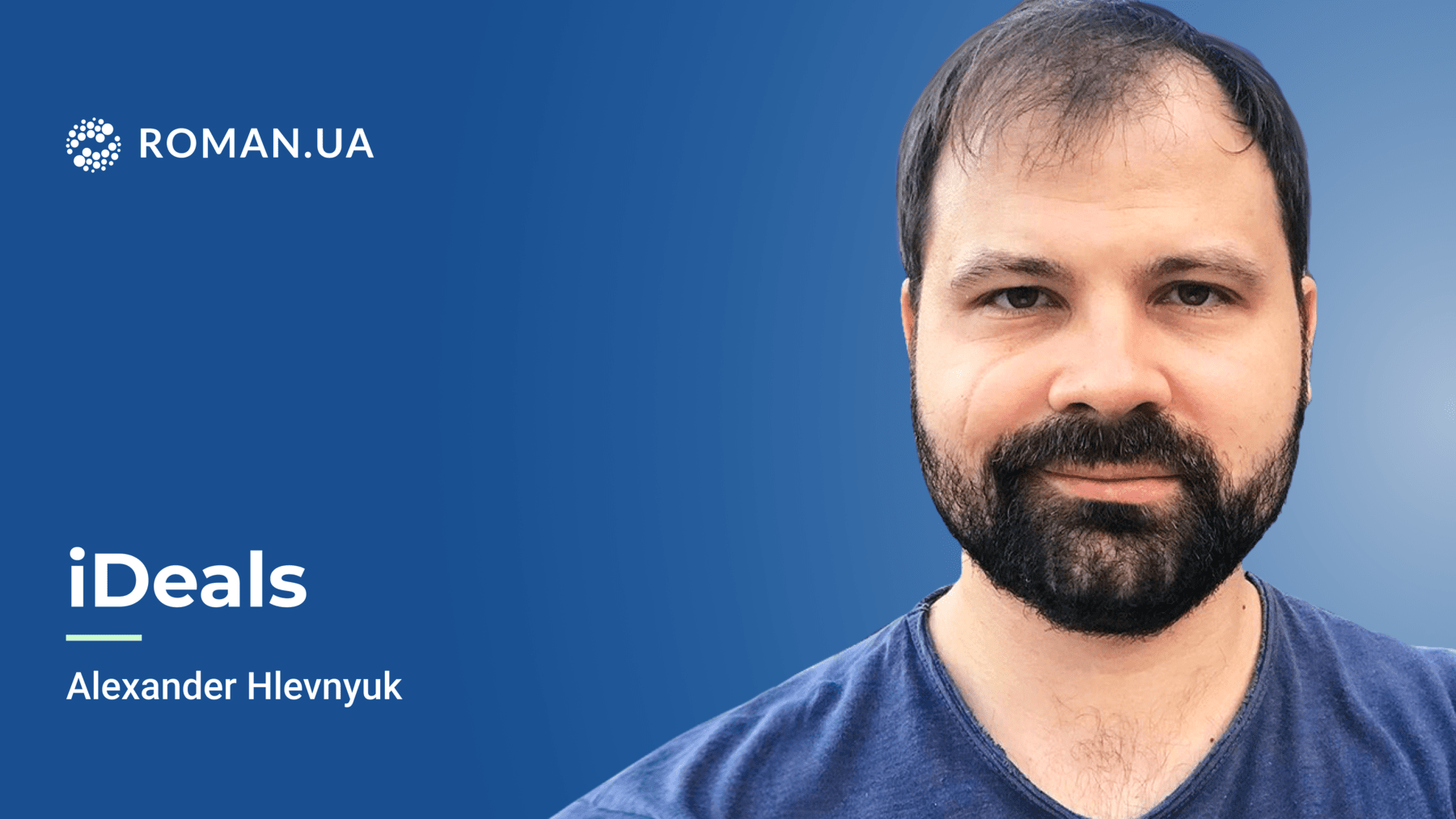 I am Alexander Khlevnuk. I am responsible for sales, marketing and analytics in iDeals Solutions company.

This is a product company, offering solutions for M&A operations (support with mergers and acquisitions) and our product is a virtual data room. It can be regarded as, say, Dropbox, which is equipped with some really specific functions providing security for those operations.

I can say that it was a classic long sale. It seems to me Roman first caught my attention 5-7 years ago as a marketing specialist in Ukraine. But in the context of the tasks I used to have, there was no need for cooperation yet.

And step by step, year after year, I had a feeling you are the person I can try and start working with within my range of tasks.

And probably the last qualifying criterion was the first stage of the project when we were analyzing our needs and our current position, and you were conducting an audit. And the way you conducted it, accompanied by your findings, was a signal that we can proceed to working on the project.

In the structure of our acquisition process, the paid channel is quite substantial, but at the same time, it has certain limitations. I mean, I can’t say that we belong to the game development niche, where you can constantly buy more and more traffic, but there is a particular demand in the world, which is regulated in a way by M&A operations, taking place globally. In the economic boom, the demand is increasing, and in the world economic recession, the demand is decreasing. And consequently, paid traffic, especially in Google Ads, has such a correlation, but the scope is limited.

At the end of the last year, on the one hand, we got to the point of realizing that we do collect a significant part of that digital traffic in Google Ads, but it was unclear if we were using the money efficiently.

There were many indirect indications showing that the same volume can be used with a certain level of the economy. On the other hand, the way our Google Ads and other connected digital channels developed wasn’t systemic, i.e. it was a new function, which had been developing for the last two years, and we had a certain understanding of the lack of internal expertise, how to work with these channels.

And having such factors and such aims, we started entering the project trying to find who will be able to increase our internal expertise on the one hand and on the other hand help us solve the task on traffic cost optimization.

We have solved the task. I can’t say how exactly it was done.

First of all, we have significantly cut costs. If to take the average costs, we have cut them by 35-40%. And these are significant amounts of money.

By spring we optimized the cost of traffic, and it seemed some kind of a plateau from the point of view of our further development, but at the same time, we got into a new situation when there was a change in demand in the world, the competition started to increase, there were fewer leads in the search, our competitors started entering those channels more actively. And it was the point when we realized that it was necessary to grow despite the general decline, that’s it.

And I can say that we solved that task. If you compare acquisition from the point of view of off-brand traffic, last autumn, the market situation was stable, and the market was even booming in a way, whereas in spring and summer of the current year, there was a certain decline. But despite those trends, we even increased the number of acquired leads by 30%. So, even though our goal was initially out of scope, and when we started, there were no definite signals, we managed to reach it by focusing our attention.

The cost of the mistake

So, the cost of traffic for those niche audiences is usually higher, and one can say that within Google Ads, a click might cost $20-30-40 on average, whereas some other expenses can constitute up to $100 and $150. And as we understand, if there are difficulties with conversion, if there are difficulties with certain funnel stages, those cases can easily lead to losses. I can say that we are now ready to pay more than $1,000 for the lead itself. Consequently, because the click cost is quite high, it’s very easy to exceed these frames, i.e., set up certain campaigns incorrectly or set up certain limits in a wrong way, and where the cost of lead was $1,000, it can become $1,800. So, quite a substantial error can occur.

And coming back to the previous comment about the role of the agency or the cost of servicing the channel, as you can see, the cost of the mistake might be 10-20-30 times higher than the expenses on the internal specialists or, say, external agencies.

And I can’t say those challenges have come to a halt because there are some DDoS attacks, some click frauds, some other malicious operations on the internet, which make up the traffic. And in our case, the cost of the absence of control can easily turn into the loss of tens of thousands of dollars and can be really sensitive.

Before having worked with you, I had an experience of working with other agencies in Ukraine, which can be regarded as top ones. The main context of their drawbacks was connected to the fact that those companies got really extended both vertically and horizontally. On the one hand, you work with a specialist or two, they have their mindset for solving your task, but the people responsible for the decision-making process in this team or all the teams, those who work with the clients, are very far up the vertical and the feedback can be really limited in terms of its effectiveness. Yes, they will always listen to you and say: ‘Sure, we understand what needs should be enforced here and there,’ but the opportunities for those people to change anything are minimal. That is, suppose they can’t afford an analyst within their budget. In that case, they can’t include one in the staff, they have their limitations for such tasks, or if there’s some crisis policy in place in the company in general, they can’t in a particular moment or month or other sets of time pay more attention to your tasks, because they have their manager, saying: ‘No, no, only 10 hours, that’s it’.

And while working with you, we had such expectations, and I can say that it was entirely justified.

And due to the fact that the company is small, and the management of the company is involved with the tasks and is communicating with the client, a lot of the things can be changed effectively.

So, no one is perfect, which means that everybody always has some difficulties, various approaches, but the number of initiatives on your part eventually leads to those changes. You say: ‘Dear colleagues, why don’t we change our way of reporting and make it such and such?’ Two weeks after the way of reporting was changed, you say: ‘What if you do certain things, you will structure them this way, write about some marketing experiments in such a way?’ ‘Okay, let’s do it.’ So, in big companies, it won’t work. They have their framework, and they work within this framework.

It has worked with you, and I can say that probably the main value is the level of flexibility and the desire to go further if the situation requires.

As we are a product company, which works in the B2B segment, the service price is unimportant from the point of view of the goals we want to reach.

I would say: we welcome the increase of the expenses if it can effectively influence the result’. Thus, the value is paying off multiple times.

I have just mentioned one of your strengths when the company’s management gets involved with the projects, communication with the clients, and I can even imagine taking part in some hands-on processes, such as going to Google Ads and looking at what’s going on there and how a certain company is performing. This approach has a reverse side, which I can call a drawback, and this is the lack of the systemic project management. When certain people are responsible for certain tasks, for their coordination, for their synchronization, for the consistency of some procedures, which can take, say, one month.

When it’s not the management of the company, not the top level, which definitely prioritize certain projects, which have certain tasks out of the client scope, but rather of administrative nature, I don’t know, vacation, for example, and when we say that a company has such a function as project management, organization, and coordination, in my opinion, it will help you move even faster and reduce the number of situations when you would need to say: ‘Let’s have a chat, sync up, let’s put together the whole picture of what’s going on here or there’.

I would recommend your company to those who are aiming for high transparency in their work. To those looking for an opportunity to get a team, which would work kind of from the inside, meaning it’s not an agency, involved in other tasks, but rather people who empathize with your company’s goals.

And here is another component, which must be important for a scalable business that grows, but it worked in our case, and it is worth mentioning. We started in one scope when there were two people working on our project, but as our requirements increased, as new projects emerged, we demanded more attention on the part of your agency. And there was this important flexibility when you started engaging additional people, who, on the one hand, are as qualified or even more qualified, and, on the other hand, get involved in solving tasks quickly. We don’t need to spend another month working with someone else, explaining all the aspects. You were some kind of a backend for us from the point of view of those tasks when you could have just delegated one thing, then another thing, and there have never been any sags in quality, which remained at the same high level as during the first project. So, if your business is growing, if you understand that in a quarter or two there might be some enlargement, I can say that Roman.ua agency is also ready for those challenges and is monitoring the situation to know when the scope should be increased, and more people should be involved in the project.

Do you want to get an audit of your online marketing?

We know how to find growth opportunities for your business